It should come as no surprise that the Harvard Crimson lead this weekend’s entry. The Crimson scored a pair of huge road wins last week, downing No. 1 Boston University 3-2 in overtime on Tuesday, then smothering No. 4 Massachusetts-Lowell 4-2 on Saturday. Harvard is now 7-1-2 overall, and 3-0-1 against Top 10 teams (including an earlier tie at Union and win at Boston College), all on the road.

The special teams are rolling (31 percent power play, 92 percent on the kill), the team hasn’t lost when scoring first (6-0-1) and has never trailed at the first intermission, and the top line of Jimmy Vesey – Alex Kerfoot – Kyle Criscuolo is one of the hottest in the nation with 17 goals and 42 points between them. Oh, and goalie Steve Michalek is stopping 94.7 percent of shots faced, which is insignificantly worse than one goal against for every 20 shots faced.

Teddy Donato’s road warriors are unbeaten in six road games this season (5-0-1), with two more coming up before the holiday break (at Princeton and No. 14 Quinnipiac). The second half of the season consists of six road games, eight at home, and three neutral-site contests. Hope Harvard digs home cooking as much as it seems to enjoy quality time on the bus.

A 4-3-1 record might not take home any trophies, but it’s a far sight better than last year’s alternative.

The Big Green – 0-8 at this point last fall – climbed above .500 for the first time in three weeks with a massive 2-0 home win over No. 1 Boston University. (BU had a tough week against ECAC competition, but the Terriers saved some face in downing No. 9 Colgate 5-2 on Friday.) Sunday’s victory was no lucky result, either: Dartmouth dominated BU 36-23 in shots, including 21-5 in the second period alone. The Big Green also succeeded in accomplishing what only Harvard had been able to do thus far this season, by keeping superstar Jack Eichel off the scoresheet.

The decision was Dartmouth’s first victory over the nation’s top-ranked team since 2002, when the Green upended Boston College. The team has now won three of its last four (3-1), with its only loss coming to rapidly rising Harvard.

Two ECAC sides played neutral-site games this weekend: Cornell improved to 2-3-1 at Madison Square Garden with a 3-1 victory over Penn State, while Union fell hard to Western Michigan in the championship of the Shillelagh Tournament at Notre Dame.

The Big Red battled back from a submissive first period to defeat the Nittany Lions on the strength of 37 saves from sophomore Mitch Gillam; Cornell has now won three straight and four of five (4-1) after a 0-3-1 start.

Meanwhile, Union’s difficult-to-define season continued with its worst loss and most goals-against since an 8-0 February, 2008 loss at Colgate. The Dutchmen are 2-6-1 in their last nine games, following a 5-0 start. Union is 1-4 in one-goal games this season which usually indicates a touch of bad luck affecting the overall record, but boy, the team’s .881 save percentage and 74 percent penalty kill are tough to pin on misfortune. It was bound to be, and indeed still is, a fascinating season to follow in Schenectady… though fans of the Garnet & White may have different adjectives attached to the season to date. 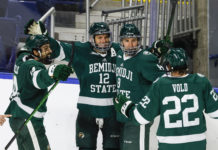