Legend may be the most overused word in sports.

While I have tried to avoid it over the years, every now and again there seems like no better option.

• Story: Parker announces retirement from Boston University: 'It's been a great run'

• Commentary: A Boston University bench without blue-collar Parker won't be the same

When it comes to Boston University coach Jack Parker, there are actually plenty of words to describe him. There are the nouns like boss, strategist, thinker, recruiter and father figure. There are the adjectives such as feisty, crafty, punchy, motivating and intimidating.

But as I use all of these words to describe a coach I’ve covered for the better part of a decade and a half, I still come back to that overused word when I think of who Jack Parker is: a legend.

I remember the first time I encountered him. It was 1992 and I was a young equipment manager in the league at an opposing school and Parker walked down the hallway at Walter Brown Arena. He was a well-dressed man who I distinctly remember wearing Spot-Bilt coaches shoes. A man in a suit and tie but wearing what to me resembled sneakers on his feet.

To this day, that image still personifies Parker in my mind. He made himself out be a polished head coach on most of his exterior, but dig down a little or watch him for a while on the bench and you realize Parker is a blue-collar, hard-nosed coach.

The truth is that even in his biggest successes, the native of the middle-class town of Somerville, Mass., never really lost his roots.

As Parker began the end of his career on Monday, announcing his retirement at the end of this season — something that could come as early as this Saturday evening when his Terriers face Merrimack in a best-of-three quarterfinal or could occur in Pittsburgh at the Frozen Four, a destination that Parker has reached 13 times in his 40-year coaching career — it was easy to realize that Parker still remains a polished common man.

The 40-year bench boss at Boston University — the longest tenured coach at the same school in college hockey’s history — said on Monday that his departure won’t hit home for some time. And a part of that is fitting for the man that most never could imagine stepping aside.

He made himself out be a polished head coach on most of his exterior, but dig down a little or watch him for a while on the bench and you realize Parker is a blue-collar, hard-nosed coach.

Not only will Parker hold his team’s reins through the end of this year’s playoff run, he’ll remain a part of the university, serving as a special assistant to president Robert Brown, assisting with the school’s fundraising efforts.

If anything, it gives Parker, who turned 68 on Monday, a place to begin his retirement (c’mon, we all know that it’s difficult to step away from a job and forget about a place where you’ve spent 48 of the last 49 years of your life as a player or coach). In reality, Parker probably needs to leave some sort of shadow on this program.

Imagine replacing this college hockey icon. There are two coaches with more wins — Jerry York and Ron Mason. York remains at BC, but even when he departs, he’ll do so after 20-plus years, not 40. Mason left Michigan State after 23 years. While both are incredible runs, they’re so far away from 40 calendar changes.

When BU replaces Parker, it’ll be placing someone in that post that hasn’t been vacant since Richard Nixon was president.

As BU athletic director Mike Lynch pointed out on Monday, there will be no shortage of candidates (something I’ll explore soon). But whichever person decides to take the chance to fill Parker’s shoes, one can only hope that he possesses some of the qualities Parker has embodied.

Every player I spoke to on Monday said the same thing: Jack Parker was an incredible father figure. Parker himself said that on Monday, stating that one of the greatest things he takes pride in as a head coach was raising a number of sons (his count was the low 200s; looking around Agganis Arena on Monday, you would believe every single one of them was there).

Parker also will leave a legacy of competitiveness. Few coaches have had such a love-hate relationship with the officials. When constructing Agganis Arena nearly a decade ago, not only did Parker build a perch on the home team bench that was easily accessible to the referees’ ears as they signaled penalties, he also allowed the referees’ dressing room to be named after him.

But that’s Jack Parker: serious and intense to scare anyone — from a young player to a cub reporter — but not serious enough with himself to keep him from cracking the occasional unexpected joke to lighten a tense moment.

Parker still has the rare chance to add to his coaching legacy. But if this weekend’s playoffs or even the games in weekends to come don’t produce resume material, what has been accomplished at Boston University will be remembered forever: three national titles, 13 Frozen Four appearances, 24 NCAA appearances, eight Hockey East regular season titles, seven Hockey East postseason titles.

And then the number that many will remember: 21 Beanpot championships.

Many in the college hockey world don’t even know what the Beanpot is, beyond a mid-season tournament that garners a lot of local attention.

But for many in Boston, the Beanpot is as important as the NCAA tournament. Often times, if you travel to the arena of BU, Boston College, Harvard or Northeastern on the weekend following the Beanpot, you’ll notice that the often-packed student sections are near empty.

The fact of the matter is the Beanpot is so big in Boston that many fair-weather student fans think the season ends after the second Monday in February.

That’s what makes Parker’s success in that event so incredible. His Terriers won 21 titles in 40 opportunities. Parker was, is and always will be Mr. Beanpot. It almost seems inappropriate that Parker retires after his team finished last in a Beanpot, only the third Parker-coached team to lose a consolation game.

BU purists might feel that it would be more appropriate next February to have Parker’s successor give way to the BU bench on the first Monday in February.

We all know that can’t and won’t happen. In the coming days or weeks, the Parker era will end at Boston University. The school will move on, find a replacement and probably have similar success. Parker built the BU program to a powerhouse and anyone in college sports understands that powerhouse teams remain as such even after a coach retires.

But we all know that without Jack Parker behind the bench, things will be different. That, indeed, may take a little time for all of us to accept. 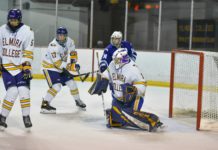 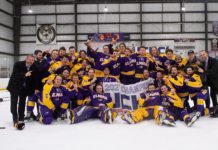 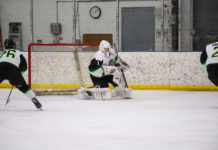