While most people will remember the 2012-13 Hockey East season for the emergence of Massachusetts-Lowell, it may be necessary to be reminded that with a couple of different puck bounces, the Providence Friars could have been the ones celebrating.

Providence, which finished tied for third (and after tiebreakers was the fourth seed in the playoffs), could have captured the league title had it defeated the River Hawks at home on the final night of the regular season.

Two weekends later, Providence lost a third-period lead against Lowell in the Hockey East semifinals to end their season, and the River Hawks went on to capture the Lamoriello Trophy.

That, simply, is how tight things were last year.

For Providence fans, reliving both of those memories may be painful, but they should also serve as a reminder of how high expectations should be for this year’s team. Possibly the most underrated club in the preseason coaches’ poll (picked fifth), the Friars return a significant piece of last year’s club, led by standout goaltender Jon Gillies.

Last season, Providence coach Nate Leaman equated Gillies to a 40-goal scorer, figuring that he saved the club a goal a night with a save that one wouldn’t expect him to make. This year, Gillies’ return (for what could be his final season at Providence if the NHL comes calling), combined with the maturity of a gritty lineup that gave many Hockey East teams fits, should produce even better results.

Still, Leaman guards against any sort of inflated expectations.

“We’re still very young,” Leaman said. “Twenty of our players are freshmen or sophomores this year. Our success is going to depend upon those young guys taking steps.”

For Leaman, this season is about taking the next step. The Friars haven’t been to the NCAA tournament since 2001 and returned to TD Garden last year for the second straight season under Leaman after having missed the playoffs for three straight seasons under coach Tim Army.

“Are we satisfied with that or can we grow up?” Leaman said when asked how Providence can build upon the two Garden visits. “We had a winning season last year, we were ranked nationally and we were under consideration for the national tournament. A lot of people pat you on the back and think we had success, but that’s a minor step.”

If the Friars are to turn that into a major step this season, they’ll have to get more offensive production. Their 2.76 goals per game were tied for 28th nationally. You can look to upperclassmen like Ross Mauermann and Derek Army along with sophomores Nick Saracino and Mark Jankowski, both looking to improve on solid rookie campaigns, to provide some offensive punch.

On the blue line, Providence will have to replace Myles Harvey, who, despite just one goal last season, was a major presence. John Gilmour had moments of brilliance in his rookie campaign.

This is a young team but youth has proven powerful for many in the past. There’s that potential for the Friars.

Impact rookie: With few major departures, the Friars recruiting class is a small one. But one player who could have some impact is rookie forward Nick Rufo, who was among the players listed on the futures list by NHL Central Scouting.

Why the Friars will finish higher than predicted: When you have a goaltender as solid as Jon Gillies, anything is possible. He was the heart and soul of this team a season ago, and it lost very little from its nucleus. Add in coach Nate Leaman and his track record for turning around programs and you have to believe the Friars will battle for the regular season title.

Why the Friars will finish lower than predicted: The one X-factor for the Friars is youth. This is still a team that is heavy in underclassmen. While you expect improvement from the sophomore class, there is still a lack of experience in championship situations. 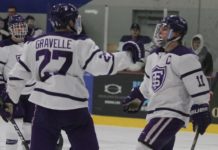 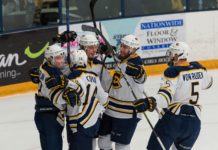 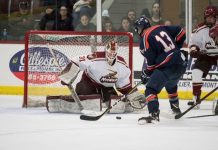